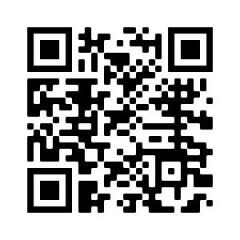 Along the whole circular path you can find lots of information boards next to those maps of overview in Ranis and Krölpa. They shall explain the special at this place. You can find the locations of the information in this map. Here is short explanation what you can expect on the special places: 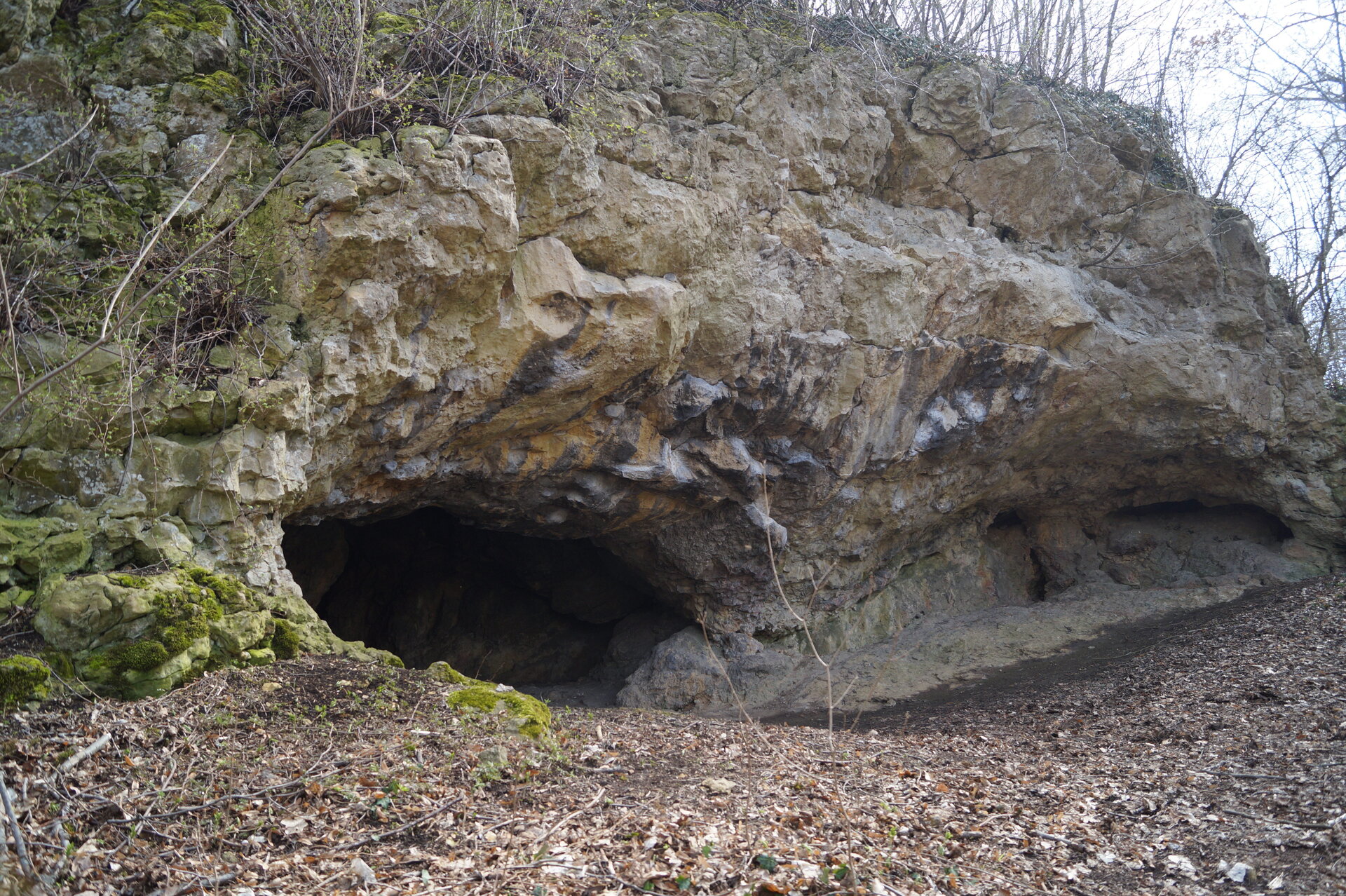 If you follow the path for another 150 m, you will reach the Herthahöhle. This represents an demolition (rock roof, rock niche, also half cave). The first excavations in and in front of the Hertha Cave took place as early as 1925. The oldest finds date back to the Paleolithic Age. 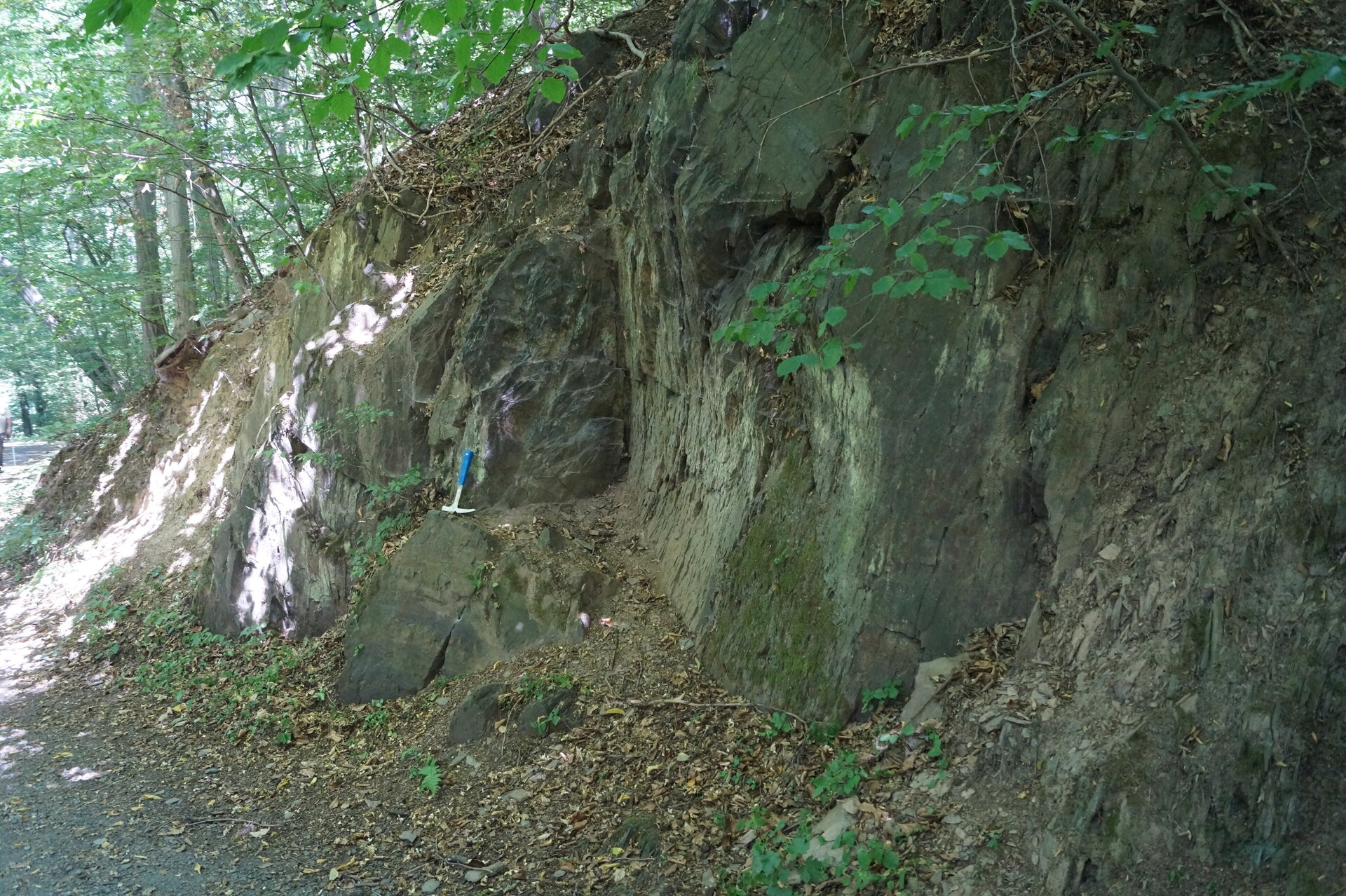 Along the entire path through the Fischbach or Hain valley between Krölpa and the wisent enclosure can encounter rocks directly at the edge of the path, on the slope to the Brandenstein and Hausberg and in small former quarries, which are clearly different from the limestones of the reef bodies.

Characteristic for both rocks is that the schistosity as the direction of the cleavage of the rocks is usually more obvious than the bedding. 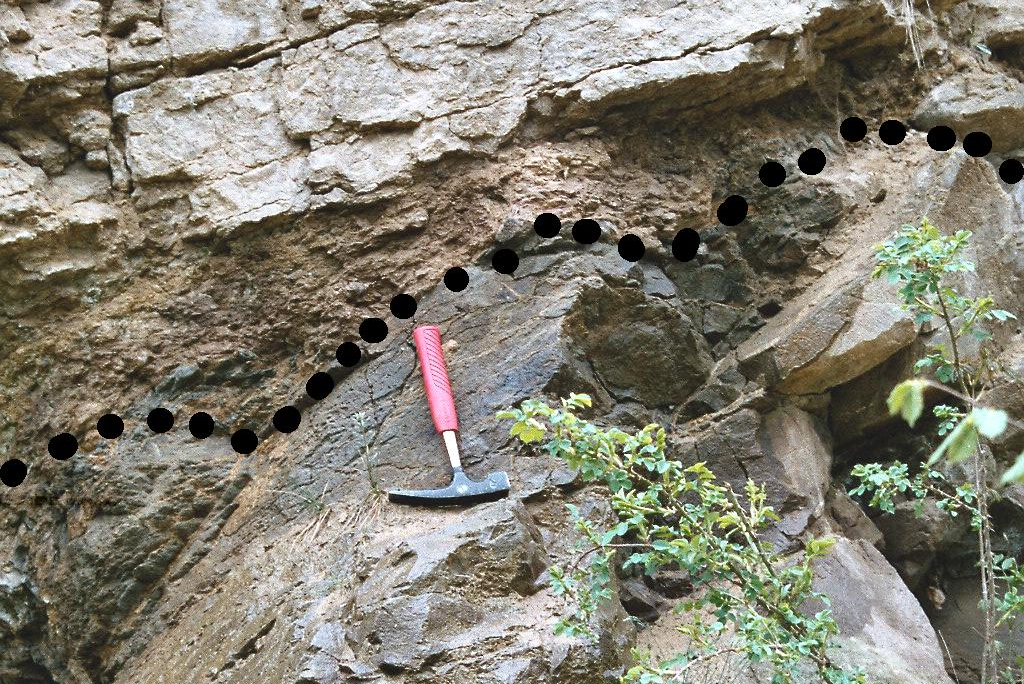 The entire steep slope of the Pinsenberg above the street Hainweg in Krölpa is built up of reef limestone. At the foot of this steep face one finds a small outcrop of special importance: Here the direct deposition of the reef limestones on graywackes of the bedrock can be observed.

The graywackes were deposited in the Lower Carboniferous (Viséum) about 340 million years ago and folded about 330 million years ago during the Variscan mountain building. After uplift and subsequent erosion of this mountain range, flooding occurred in this area in the Zechstein (transgression). The reef limestones then formed in this sea.

This overburden, which represents a temporal gap of at least 70 to 75 million years, can only be observed in such a good way at very few places in the Orla Valley. 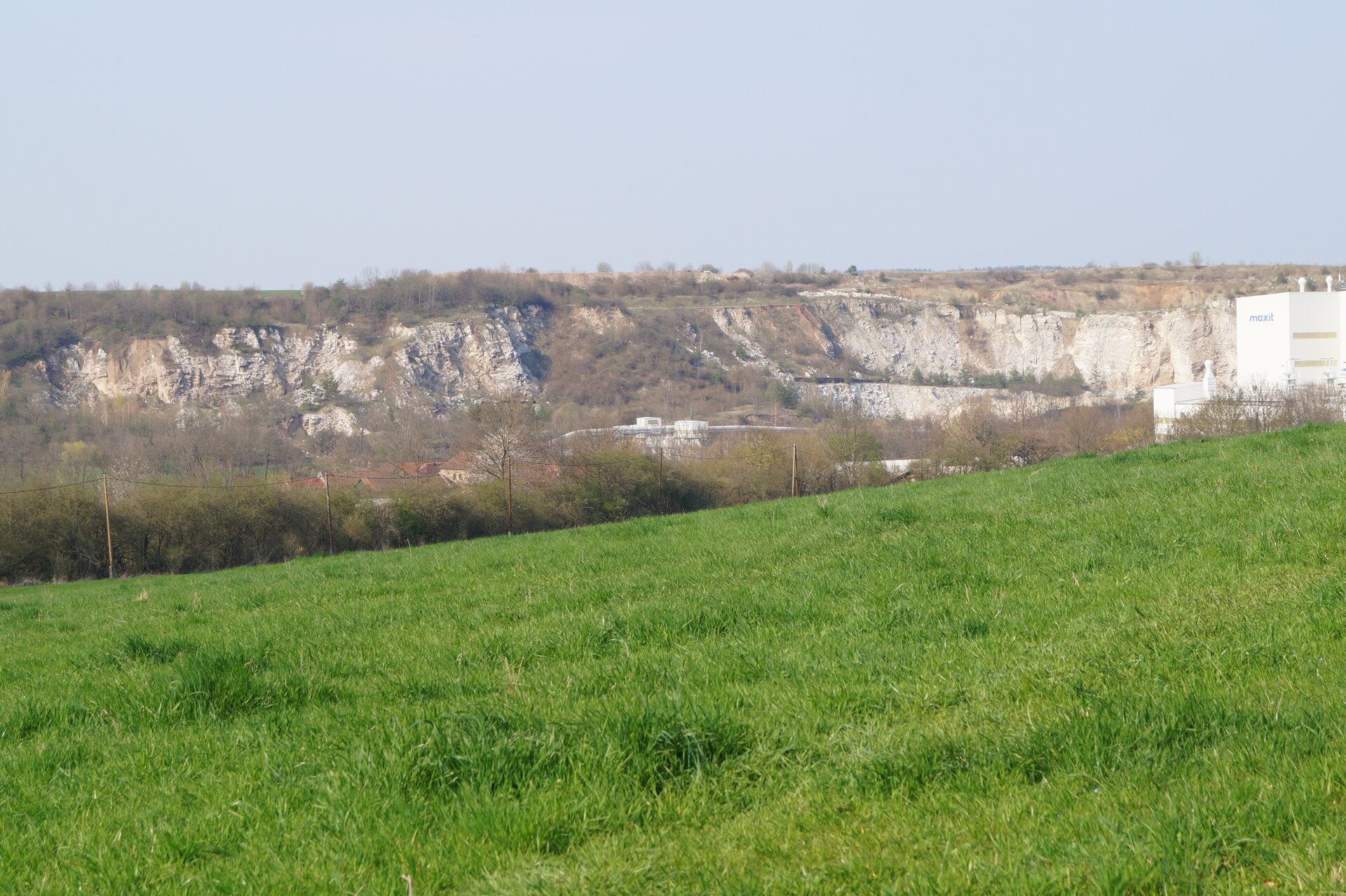 From the northern slope of the Pinsenberg you have a very beautiful view into the Orla valley between Krölpa and Pößneck.

The view is characterized by the white quarry walls on the slope north of the Kotschaubach. This is a large quarry where gypsum and anhydrite rock were mined in the past. Both rocks are still mined today for the production of gypsum-based building materials - but here in Krölpa they are now only mined underground. They were and are sought-after raw materials for the building materials industry and thus an important basis for the local economy.

At the same time, their extraction represents a serious interference on nature and the landscape. By moving mining underground, the building materials industry in the Orla Valley avoids unnecessary conflicts.

The reefs of the Orla Valley owe their good preservation to the fact that they were overlaid by the gypsum and anhydrite rocks for many millions of years and thus protected from weathering. It was not until about 2 million years ago that the weathering of the overlying rock layers, i.e. above all the sulfate rocks, had progressed to such an extent that the reefs were exposed again. 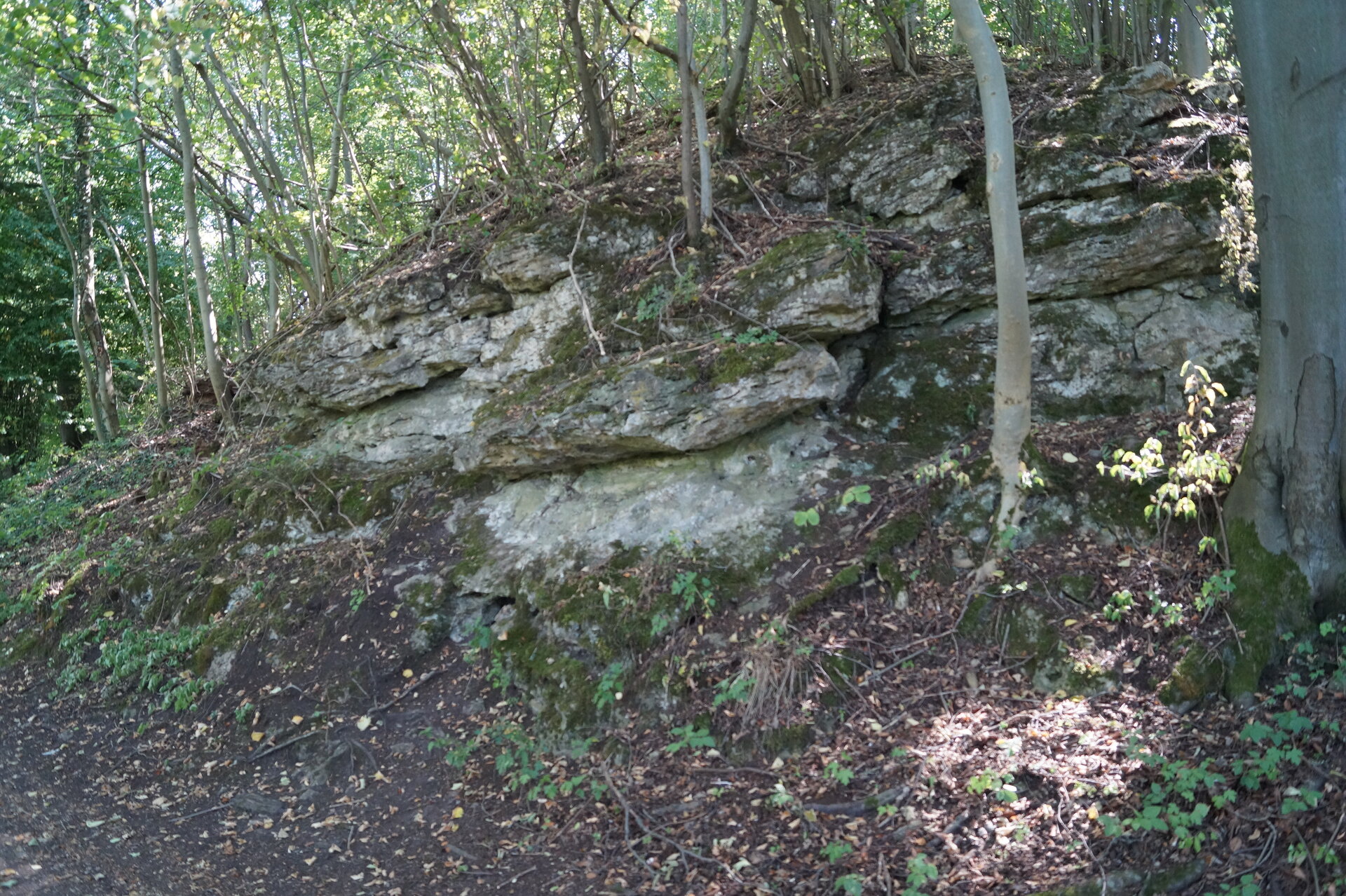 A reef can be divided into the reef platform and the reef slope. The reef platform, as the reef grows upwards, is constantly exposed to waves, currents and surf. In the process, the calcareous material produced by the reef-building organisms is constantly moved and crushed. This creates a largely flat platform parallel to the water surface.

The small rocky cliffs on the slope of Hausberg, where you are, are clearly inclined in the direction of the hiking trail. They represent the eastern reef slope of the Hausberg reef. Not everywhere are the layers of the reef slopes so well preserved and also recognizable in their original bedding. 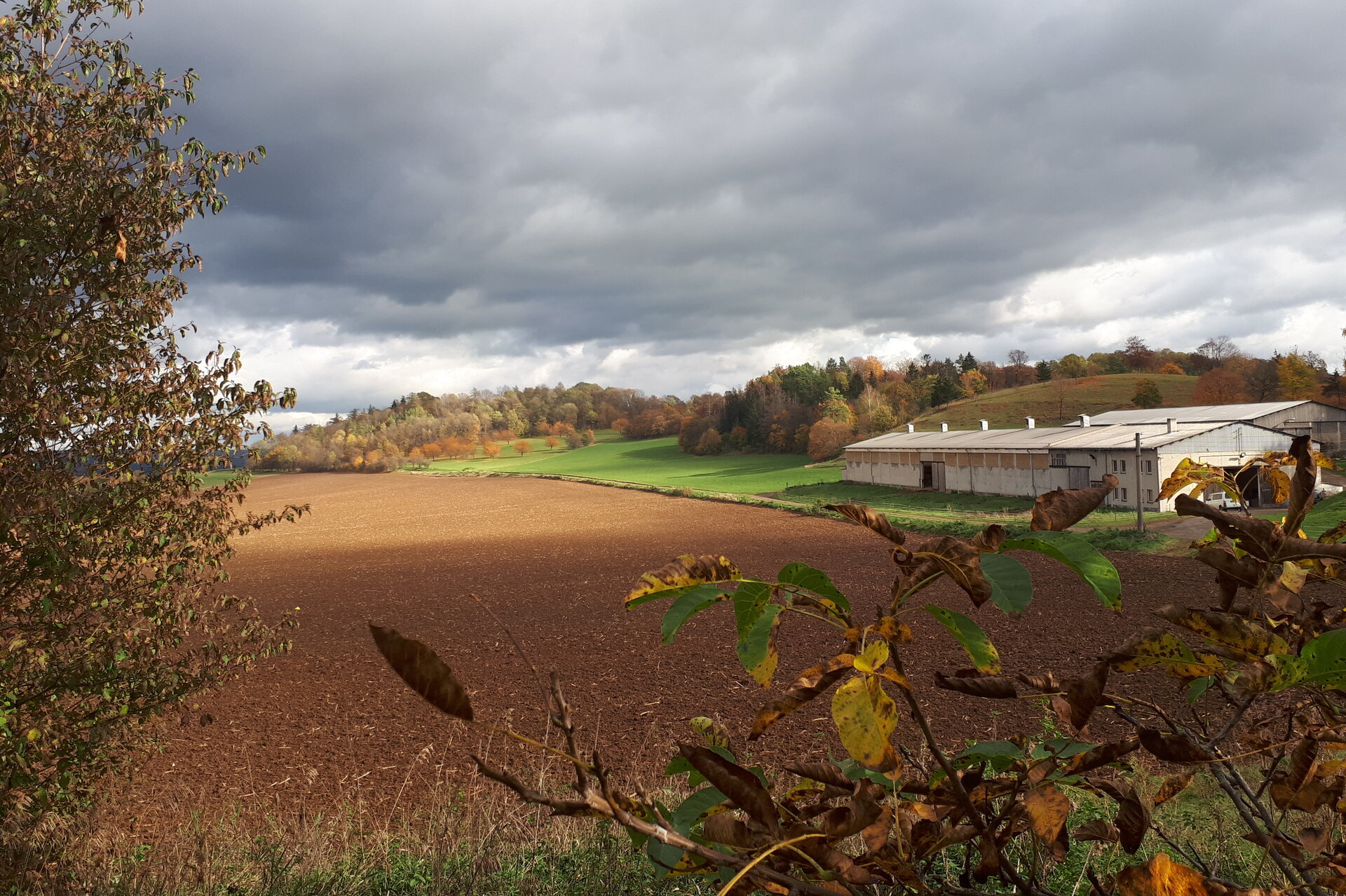 The varied landscape of the Orla Valley is characterized by mountains and ridges. These elevations, which consist of light limestone, were all individual reefs at the time of the Zechstein.

In the northern direction, there is the Buchenberg. This former reef is very prominent. This is due to the fact that the limestone of the reef was quarried in the past. Today we look at the former quarry walls.

More to the east towards the town of Pößneck, a ridge of heights extends. This ridge includes the Breite Berg, the Jägersberg and the Kochsberge. All these elevations are not as prominent as the Buchenberg. But they represent parts of a clearly larger, elongated former reef.

If you would take the path in the direction of Pößneck, before the Erzberg there is the Altenburg - an imposing mountain directly above the town of Pößneck. The Altenburg was once a reef off the coast of the Zechstein Sea and even today it rises clearly above its surroundings as Pößneck's local mountain.